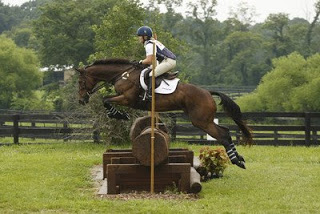 I’m a firm believer that things happen for a reason. A few months ago a horse came in for training and to be sold that has ended up being my new buddy. Sempre Fino aka “Sam” is a special horse, a 9 year old TB that was brave enough to take his amateur owner to Intermediate and talented enough to go much further with a professional. Sam took the sidelines for much of ’08 and part of ’09 while his current owner pursued her academics. Sam has only been with me for a few months and has shown great promise for the future, I really believe he is a rising star. Sam is brave, scopey, agile, and a type A personality! All traits that I feel like could help lead Sam to a career as a 4 star horse.

Since Sam has only been back to competition for a month + and his owner is leaving for graduate school we have the opportunity to syndicate this horse at a very affordable price. This is a unique opportunity for people to become immediately involved in a horse and rider’s upper level career. When Havarah’s Charly was purchased he was a young horse and took several years to develop into an Advanced level competitor. Sam is ready… NOW! There is a strong possibility (with the help of a few new owners!) Sam and I could be competing at the Plantation CIC ** in September and the Fair Hill CCI ** in October. This would then lead us to the Advanced level in 2010 competing in CIC ***’s and CCI ***’s. Rolex Kentucky CCI **** in April of 2011!!!

Havarah’s Charly’s syndicate was put together by a group of people who wanted to support me in my quest to be part of the USET and I hope to put together another group with the same intentions. I have a plan of how this can be done without being a financial bur-don on anyone. If you or anyone you know are interested please contact me for details on joining the Sempre Fino syndicate.