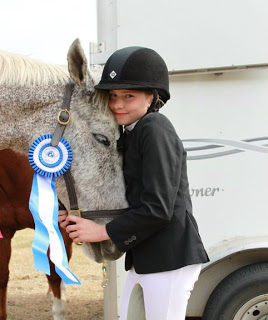 Plain and simple: this girl’s got some major talent!

Maddie broke onto the Havarah scene this past December – decked out in Horseware Ireland clothing from head to toe.

One thing was certain; Maddie had talent and a passion for eventing.

Determined to improve her riding and really dive into the sport, Maddie became a working student for Molly and decided to make the trek to Aiken, SC with the Havarah Team for the winter.

Being Molly’s newest student, Aiken was a great time for Maddie to really learn from Molly and delve into the finesse of each phase of the sport.

Already competing novice, Maddie’s dreams were set upon moving up to training. Molly, trying to instill some obtainable goals in Maddie, told the tale of how she moved up to training. Molly’s trainer told her that when she won at novice she could move up. Maddie seemed to seriously listen to this story as at her next novice combined test, she won.

According to Molly, this ability to listen and do is a common theme with this talented little rider, and what makes teaching her so much fun.

It is quite incredible. Maddie will have never done something before and all Molly has to do is explain. Then Maddie goes out – and she does it!

Yes, like everyone, she has good and bad days, but her ability to not only understand, but feel what Molly is explaining is remarkable for someone so young.

Maddie really broke out in the eventing scene this season, and the common response is “is she that tiny little thing on that horse? She is so adorable!” 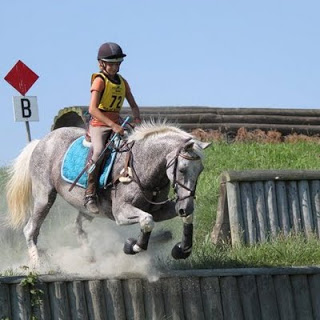 It is hard to miss this string-bean on the 16h flea-bitten TB named Carson “Hope to Star”, decked out in purple in teal. Not to mention Carson is 18 years old!

Having taken home multiple 2nd places, Carson and Maddie, along with mom and groom Kim Parisan, will be making the journey to Chattahoochee Hills for the AEC in September. They will compete at training level and go for the gold!

Despite perfecting her major skills, Maddie is also a hard worker around the barn. She has taken over my role as barn manager Kara’s assistant – and she makes sure to be Charly’s daily caretaker.

Great with the horses, this bubbly, self-confident kid is such a great addition to the Havarah Team. As always, horses are a great way for kids to learn responsibility and they get a chance to be involved in something bigger than themselves at an early age. Each day for Maddie is a learning experience, but she has the determination and talent to make it to the top.

It has and will continue to be an utter joy to watch this girl fly through the levels. Having conquered training level, she is now bound and determined to be the youngest preliminary rider at Havarah – unfortunately for her USEA regulations are now the only thing holding her back!

Keep your eyes out for Miss Maddie – you will be seeing lots of this one!