The last of the Connemaras – Mr. Indy

Indie is the oldest of the pack. He’s a 2001 Connemara Cross by Kynymont Dublin and out of Greystone Irish Rose. Standing at 16h Indie is half Connemara and half TB/Selle Francais/Canadian Hunter.

Indy came to Havarah with a solid dressage background but decided he was going to try his hand in the triathlon of equestrian sports.

Indy immediately stole Hannah’s heart (Molly’s groom). He automatically became her favorite Connemara, which is understandable because he is so darn cute.

He has the sweetest face. Where most horses have indents above their eyes, Indy doesn’t. This gives him so much personality and really he has such an adorable look about him because of it.

In addition, this horse can move… and he can jump. He is consistently racking in the low scores and finishes in the top 10 placings of his division.

He started his career in Aiken this winter and got a 10 on his first dressage test with Molly. This guy knows how to turn it on for the judges.

Indy really is unlike any horse I have ever met. He is just such a pleaser. You can tell when Molly rides him that he wants to do a good job 100 percent of the time.

It’s this mentality that makes him so enjoyable for Molly and why she enjoys competing him so much. He never seems to pull attitude either. There are those horses that sometimes say “no” but if Indy ever had a “bad day” it’s really because he just doesn’t understand something. Once he gets it, he’s perfect. 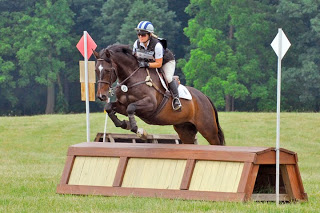 This part of the blog is always bitter sweet for me – Indy is for sale.

It’s bitter sweet because we love all the horses at Havarah. I’ve spent so much time with all of them that I now feel I have 26 horses. We get to know their needs and personality quarks so I’m never ready to see one go.

However, if you are interested in Indy email molly@mollyrosoin.com and come check him out! Most likely you will fall in love with his endearing personality and see that he is the entire package.

We again want to take a moment to thank Pam Liddell for bringing these wonderful horses to Havarah. It has been Molly’s pleasure to work with and compete her three talented boys. If you want any more information about Pam Liddell and her Connemaras visit Kynymont Farm.