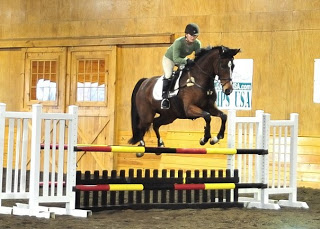 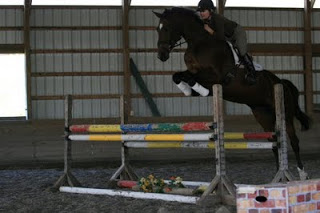 I feel like I have so much to say I don’t even know where to start!

Most importantly, all the horses are going very well and I’m already incredibly excited for 2010. I’ve got 2 very lovely mares in for sale, Wanda and Sabrina. Both of these have current videos on U- tube, searchable with their name and my name as key words. I have to say that I won’t be disappointed to compete either of these two horses in Aiken, but I’d be surprised if they arent in their new homes before then!

Havarah’s Charly is once again a very happy horse, back in daily work, he once again has a reason to be! This horse loves to have a mission in life, at this point it is just a lot of trot, but I believe he knows that this will lead to a greater good. He still has days that he tests my skills when he has toooooooo much “life” as Roddy Strang would say! I can’t get mad at him, and besides when I took a girls night out to New York City, I did a pretty good job on that BULL! 🙂

Beaujeste was forced to have two weeks of vacation after he stole the show at the Anne Kursinsi clinic. This lil big man is all heart and a child genius. At 4 years old he has learned many life lessons and doesn’t want to put the book down. Tomorrow is back in action for him, and I know that he’ll be ready to please.

I’ve got a new horse in training, Sprite, tomorrow’s fanciest childs small pony. This one will end up on the show squad with her owner, Quinn Anderson, when we return from Aiken this spring. Sprite was bred and raised by the Anderson’s and is one heck of an athlete. A connemarra/TB cross that looks like a Barbie Doll!

I owe a long over-due congrats to Lauren Billys
My student from California that has spent the last two summers out being a Working Student here in Maryland. She not only completed her first CCI * but gosh darn nearly won it! Her dressage and cross country were spectacular and she’s just a few rails away from complete stardom. I’m very proud of the commitment that Lauren has put forth and the skills that she has put forth to her riding. Lauren is working toward a possible on day ride on the Puerto Rican eventing team…. look out!

Havarah Equestrian will be heading to Aiken, SC on January 24th…. stay posted!