Winter is over but spring is in the air – to mark the end of the winter season down South Molly and John Nunn headed back to PA but stopped off at the Fork for one last go before hitting the Northeast show scene once again.

John broke his dressage score record on Smiley and walked (or strolled, possibly with some swagger) out of the ring with a 30 in his training division.

Though he recently moved up to prelim at Pine Top on his horse, Smilelikeyoumeanit, The Fork is a challenging show so John wanted to give him a good go and keep building his horse’s confidence.

He had a clear show jumping round and the most beautiful cross country ever seen, according to Molly. He took home 3rd place in his division so congrats to one of the Havarah-man team members, John Nunn!

Molly said Benny did and got just what she wanted him to out of this weekend. He got a 30.9 in dressage, had a really positive cross country (with only a couple time faults) and a clean show jumping round.

She said he was very obedient the whole weekend and they just need to work a bit more on thge gallop fences to catch the time next time out.

Overall he was very happy to be at the show and had a positive attitude all weekend, which we at Havarah think is most important!

Molly was really excited to ride Sabrina at The Fork this weekend. She felt better than ever and truly ready to go be competitive in her intermediate division.

They were warming up famously for dressage, but unfortunately Sabrina took a funny step and had a pretty severe trip, nearly a fall. Molly and the crew didn’t realize something was wrong until after dressage. Later on in the day, and it was apparent that Sabrina needed some R&R, thus they had to withdraw her.

We are positive her day to shine will come soon, and she’s just going to receive the star treatment she’s accustomed to this week to make sure she’s perfectly fine.

Molly was so excited for The Fork as she always tells people “going to The Fork is like going to Rolex at your level, just at your own level.” The footing is amazing, the turf on the cross country course is incredible and every fence has its own “story” while asking you the necessary questions at your level.

But now it’s time to take the Northeast events by storm and show ’em what’s up.

Molly spent a well deserved day in pajamas today – but it will be back to work tomorrow!

Quigley being the wonderful team mascot that he is… 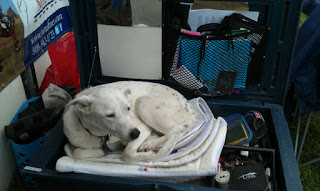