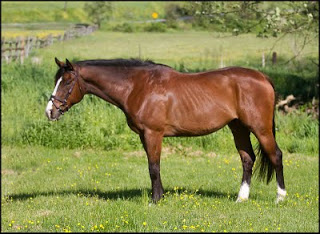 Ankhe is a 2003 thoroughbred gelding by Lear Fan and is owned by Kathy Anderson.

As the first sentence of this profile would suggest Ankhe is… big boned… and it’s a running joke that he has a bit of an identity crisis.

Ankhe, bred from a long line of thoroughbreds to become the next great racehorse didn’t really hack it on the track – I believe this is because he wishes he was a warmblood.

Not only does his body type match that of a warmblood, his personality would lead you to believe he is one. Perhaps he has spent too much time with Rivan, who is by Contango, but Ankhe wants to be a little less hot and a little more warm.

Standing at 17 hands with the muscle mass of a professional body builder, Ankhe is a gentle giant. 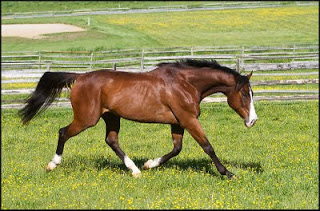 This guy earned his place as a solid citizen when he and Molly’s boyfriend, Bryce, became a team. Bryce was just getting back in the saddle when this giant came to the farm and he sort of became Bryce’s “project”.

They competed Beginner Novice together until Molly had to put Ankhe in a long-term program, but during this time Ankhe proved hat we was willing, honest and just a solid guy.

Being such a beast, it has taken Ankhe a little while to learn how to best utilize all features of his body in the appropriate way to master a dressage test. When he gets it, this horse displays very large, powerful movement.

The same can be said for jumping. In the beginning he had to figure out how to best place his feet, but when he gets it he shows a ton of scope and – as Molly points out – this powerful animal would be the most solid horse to navigate around a slippery, muddy Badminton cross-country course on.

Look out for Ankhe on the show circuit – he’s currently running Training!

Thanks Kathy Anderson for giving Molly another wonderful horse to ride!