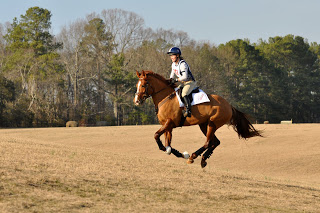 Greetings from the south!

Charly and I are on our second week at “Maple Hill South”; this is the farm Charly and the other horses I have in training are staying at while we are in Aiken. Peter Barry and his family have out-done themselves with this facility and with their kindness having us here.

Last Friday Charly had his first jump school of the season, saying that he felt like he was king kong was an understatement. Usually when horses come off of a big three day event they either are a bit intimidated the next time they start up, or very proud of themselves. Charly was definitely confident in his ability! This week has been very exciting; Tuesday was the first day that Charly and I worked on our “changes”, Charly thought this was a pretty cool new game and was very good with his hind end. (often horses change late behind, but luckily… so far at least, this doesn’t seem to be a problem) We then had our second jump school on Wednesday and Charly and I were back in the game as the saying goes. He felt phenomenal, after not jumping him for awhile you forget the good feeling that he gives you over a fence. Both of these rides were very early in the morning and I felt like we were in some sort of movie as we set off on a trail ride before dawn to get over to our lesson site, interestingly enough Charly seemed to really enjoy his early morning workouts.

Charly has adapted to his routine here very well, he enjoys tormenting his young pasture friend, who luckily allows Charly to boss him around and thankfully doesn’t give back any “hoof”! This weekend will be his first outing at a competition. We are going to “Pine Top” which is about an hour and a half from where we stay. Charly will definitely do dressage and then Boyd and I are going to discuss the course and decide what is best for Charly at that point. Next week we have a pretty full plate with the Developing riders training sessions. Cross country schooling with Mark Phillips on Wednesday, then dressage lessons and maybe a show jump lesson.

Aiken is an incredible place to be for anyone wanting to do horse stuff, and more horse stuff. Every week there are shows within 15 minutes to a couple hours away; cross country schoolings, derby’s, dressage schooling shows, training sessions and regular events. I’ve been busy with the other rides in the barn which include a few young horses starting their eventing careers and an Intermediate event horse that is here to tune up his dressage and show jumping skills. The Red Baron is one of the young ones and he helped start off my season on a good note with a win at his first ever event 🙂

Hope you are all well and staying warm, come visit!