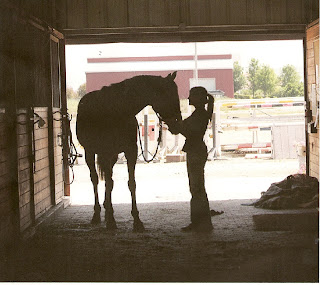 We’ve recently lost a great member of the Havarah program; Texas Ranger passed away in October and his owner Lauren Billys wrote a loving story for us all to remember him by.

“I guess I didn’t really know what I was getting into when my parents bought me my first horse at the age of twelve. I was scared and unsure of what my responsibilities would be, but, more importantly, I thought, I was excited to show off my new horse. Little did I know the impact that Ranger would have on my life for the next seven years. Our first and last events were the most memorable to me. Our first was at Woodside; my dressage was carefree. Because of our carefree attitude, our score was a 49, but I really could have cared less; all I knew was that I was having the time of my life. Ranger packed me over the course and trotted in places when I was losing my balance. So much has changed since then. Over the past seven years, I have picked 4,480 Ranger hooves and brushed his hair numerous times. It was a constant in my life, probably the greatest constant. Ranger was constant in every angle: he always wanted a bite of what everyone else was eating, he always had one bad day a week, he appreciated great care, and he would always jump the fence as long as you pointed him between the standards. Through all of this, he taught me responsibility, how to push through hard times, true hard work, and joy in doing all these things. He was there with me through the thick and thin. He really pushed me to become a better rider and to tough it out when things were hard. Through some fabulous people, I was able to see the potential this horse had and the way I could improve my riding to reach this potential. At our last event, we met this potential by winning the training three-day. It was amazing to know that all the work put into Ranger and our team work was returned with a blue ribbon and a great feeling of accomplishment. Ranger went through every phase with ease beating the competition. The greatest compliment I have received was when Chirs Scarlett, the cross country course designer, said that we rode the course the best of that day and the exact way she intended for it to be ridden. It was an unforgettable ride.
When I knew I had to sell Ranger, it never felt right, but I knew that it had to be done. But on October 20th, everything came by an unfortunate surprise. After getting a phone call that Ranger was not feeling well, I knew that this day was going to be difficult. His actions were the same calm way, but oddly different. While I sat with him, he laid his head in my lap when we waited for the vet. It was an important moment for me because our relationship had grown so strong that we had a mutual understanding, respect, and trust for one another. Before Ranger’s health went really south, he wineyed at all the horses as if saying goodbye. And then, nearly twelve hours after my initial phone call, I had to put Ranger down. When asked if I wanted to walk Ranger out and hold him, while he received his injections, I said yes. I felt an extreme responsibility that I had learned because of Ranger. I felt like I needed to return all the times that he had taken care of me by doing it for him, one last time. So my mom, Amy Fox, and I were there for the end. At that moment, I knew the changes from when I was twelve to know being with Ranger seven years later were a vital part of becoming the person I am today. I have grown to become who I am because of this great horse and some amazing people who helped me along the way.” Lauren Billys