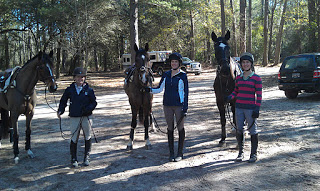 Well it was a week ago today that the first load of horses left PA to make the journey South. Now, all 17 horses have arrived safely and happily in Aiken, SC.

Robyn Weaver was kind enough to be my eyes and ears for the first week settling into the beautiful and hospitable Pine Ridge Stables.

She admitted it did take a couple of days for the horses to settle in. She assures no one was going crazy, but they were a little wound up after the long trip. Let’s be honest, the Aiken veterans probably were just overjoyed to run around in the warm sun! Sabrina – we all know you are spending the majority of your day sprawled out, sunbathing.

So far, and this is a little difficult with more horses than stalls, the hardest part was figuring out how to switch turnout. Yes, when one learns how to juggle horses, she can conquer the world!

Now the routine is 7 horses are in all night, and 10 are out all night, this then switches during the day.

The first couple of days were full or walking out horses and hacks – the best way to acclimate especially with the beautiful, sandy hacking trails Pine Ridge has to offer. But when those seem outdated.. there’s always Hitchcock Woods.

The Havarah crew has literally used and abused Hitchcock trails – they have been there four days in a row! Robyn described how they ride out on one long trail from where they park, but then end up on Ridge Mile Track. In the middle of the loop there is pretty much free cross-country schooling, complete with brush jumps.

Robyn said her leading man, Fabio, is doing really well. She was so excited because the first time she took him out on a hack, he was so calm and cool and didn’t jig the entire time on the way back. Furthermore, he was apparently phenomenal at Hitchcock woods

She and Fabio will make their Aiken debut on February 18th at Paradise Farm. She says she is just excited to learn how to relax when riding and competing – not over analyzing everything. Robyn’s already basking in the relaxed, Southern mentality.

Relaxing? Horses? OK, yes I used those two words in the same sentence but really Aiken is relaxing. Don’t get me wrong it’s also A LOT of work – but that’s just it, work doesn’t feel like work – it’s really all play!

OK ya, they start at 6:45 a.m., feed, muck, switch turnout – but then by 11 a.m. they get to trailer off to some new venue and ride till their hearts are content!

“It doesn’t really feel like work, even when you’re mucking stalls you’re not like God I can’t wait to just be done!” Robyn said. “I’m just so excited to be here, I was really actually kinda worried that I would get like homesick or something but I don’t even really think about home.”

Leto and Indie will start the show season off at Full Gallop this Wednesday at the novice level. Robyn admits it will be nice only having two horses going as she needs to get back in the swing of shows.

Yes, there are sure to be ups and downs, but everyone seems to be stepping up to the plate and just getting their work done. Robyn relates how easy it really was to transition, and how everyone just gets along so easily.

Stay tuned because you know that only one thing can come from four Havarah girls living under one roof…. LOADS OF FUN! 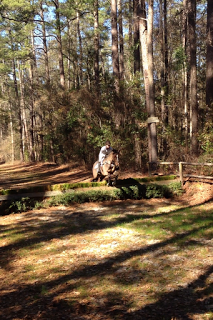