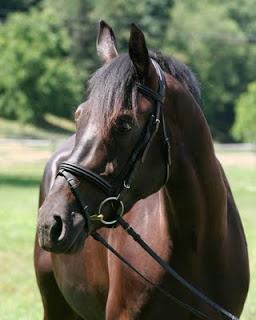 When I first met Diesel Boy, or “Leto” as we call him, I was basically interviewing for a working student position with Molly.

Kara, our barn manager, handed me a list of horses to groom, so I started grooming. I kept filtering through the horses with Kara pointing me in the direction of my new acquaintances.

I grabbed Leto out of the stall and started grooming him, not thinking anything of it, and Kara made sure to tell me that he may be a little bad with his feet because he’s only three… he’s only three? I was shocked.

So what’s the point of this little relapse into the past? It’s to emphasize how well-mannered this young man is. When I hear the words “three, baby, green etc” past ex-racehorses that made my life miserable start flashing through my brain and it takes some time to steady my thoughts. So when I met Leto, I was pleasantly surprised.

This little true black gelding is a 2007 Westphalian/TB cross (American Warmblood) owned by Molly and her boyfriend, Bryce Kinnamon. He joined the Havarah team in the summer of 2010.

Molly’s first encounter with Leto was at Roddy Strangs. He was there getting 30 days of training and Roddy had Molly take him out on a trail ride. She was sold over the first jump. According to Molly, Leto naturally has a super soft back in the air over a fence and a very balanced canter up to a jump. At three he was easier to see a spot on than many of her competition mounts. 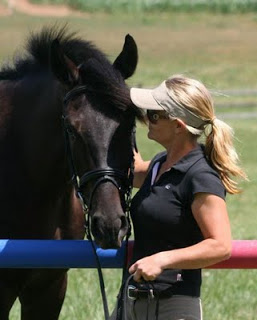 It has been a pleasure to watch this little man grow. Leto was the low man on the totem pole out in the pasture. Luckily he’s black, because he’d come in from turnout with a new bite mark everyday.

When we were down in Aiken, I really started to notice a change in Leto. Not only did all four legs start to work together beautifully, but he started to hold is own out in the field. I think the daily saying became “Dang Leto, way to hold your own bud!”

Although he toughened up enough to stand up to the older horses, he is still the sweetest to handle on the ground. Mostly, he starts to fall asleep while being groomed. Like all of our horses, Leto has learned to enjoy the Havarah grooms from an early age -it’s like going to the hair salon and getting a shampoo and message daily.

Leto has just begun his Eventing career competing Beginner Novice at a few starter trials and competing in the Young Event Horse division in the past Waredaca.

Look out for an adorable, black gelding tied to Molly’s trailer at shows. You will notice him instantly with his bushy forelock and big, curious ears.

If you are interested in finding one of these handsome boys check out Bonnie LeMonte’s Mouse House Farm in Nottingham, PA!